Energy efficiency has become an important concern for communities across the UK, and there are some great examples of successful projects that have only come to be because of the local community working together with suppliers to get things done locally. 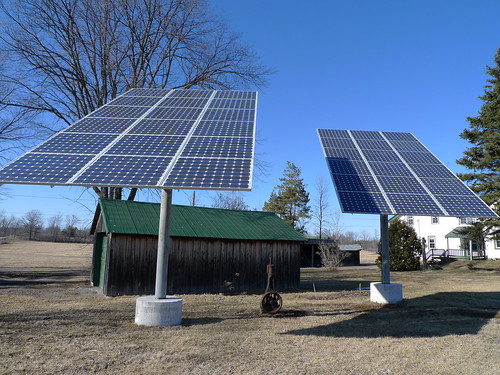 Residents of the village of Woodgreen in Hampshire got together and fought to keep their much-loved meeting place open 2006, after it was threatened with closure. They realised that the only way they were going to be able to keep their shop and post office open was to acquire the lease as a community. They set up a community association to take on the ownership and running of the shop, acquired the lease for five years, and by the end of 2006 the Shop and Post Office was owned and run by the Woodgreen Community Shop Association Ltd.
In 2010, the New Forest District National Park Authority gave the Association permission to build a new shop that would give the shop more retail space, as well as room for a bread oven and a dry cleaning area. The association were keen to make the new development as energy efficient as possible, by fitting solar panels and ensuring that at least 25% of all the produce sold in the shop is grown, raised or made within 30 miles. The new shop was officially opened on 14th May 2011, after more than four years of campaigning and fundraising by the local community.

Another example of this is the Kingston Heights eco-friendly housing development in London, which has been designed to use energy from the Thames for its heating and hot water. The project was created by NHP Leisure Developments and was launched in October 2013 by Ed Davey, Secretary of State for Energy and Climate Change.
Kingston Heights, which was once a power station, now consists of 56 houses and 81 luxury private apartments. All of these new homes benefit from a cutting-edge heat pump system, which takes renewable heat from the sun, stored in the river water and boosts it to the temperature required for under floor heating and hot water.

How does it work?

The amount of water that can be drawn through the system is huge – and of course it needs to be.  The Mitsubishi Electric Ecodan heat pump technology can manage the equivalent of five Olympic-sized swimming pools a day. River water is passed through the state-of-the-art, two-stage filtration process and through high-efficiency heat exchangers, which are housed inside a specially-built plant room adjacent to the river. When the low grade heat has been harvested, the water is fed back into the river.
The heat exchangers then transfer low grade heat from the river water to an internal ‘closed’ loop water system and the advanced heat pump technology boosts it to the temperature needed to supply heating and hot water.

When the Cotteridge Quaker community decided to revamp their existing old meeting house, they wanted to try to reduce their electricity bills at the same time. The original meeting house had been built in the sixties and was heated with expensive and inefficient electric storage heaters, and the large plate glass windows and lack of decent insulation made matters even worse.
When one Friend donated a solar panel to another for his bungalow, the group were inspired to look into ways of saving energy. They formed their own environmental group and carried out their own audit, making changes such as energy saving light bulbs and switching to a green energy tariff. This worked until the fuel prices started to rise in 2006, and the group decided that they needed to do more.
The group has since worked with the Energy Saving Trust to find more ways of reducing the amount of electricity they use, by:

Since 2005 the group has been taking daily meter readings to see how much electricity each change has saved, and they found that they’d cut electricity use by a massive 66%, and carbon emissions by 13 tonnes a year.

Working From Home - The Place Where The Work To Hours In The Day Ratio Is Already Skewed!

Things To Consider When Choosing Your Perfect Modern Dining Table

Fixing A Deeper Scratch On The Sofa and Sofa Repair

In case if you see a deeper scratch, you will need to

Ideas To Make Your Backyard Beautiful This Year

Why Headboard Is A Must Have Accessory? – Types Of Headboard and How To Choose

In the past, traditional beds already had the headboard in the structure.