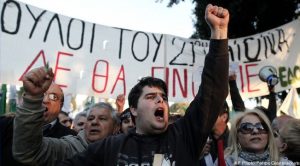 Protesters chant slogans outside the Cypriot parliament against a crucial parliamentary vote on a plan to seize a part of depositors’ bank savings, in central Nicosia, Tuesday, March 19, 2013. The Cypriot government sought Tuesday to shield small savers from a plan that is intended to raise euro 5.8 billion ($7.5 billion) toward a financial bailout by seizing money from bank accounts. The plan, which is part of a larger bailout package being negotiated with other European countries, has been met with fury in Cyprus and has sent jitters across financial markets. (AP Photo/Petros Giannakouris)